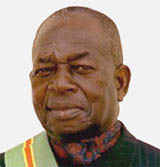 In 1910 four years before Father Simon Kimbangu customary marriage, he revealed to all that God will grant three children all boys. And i will be born again in 1918. There came the birth of Father DIANGIENDA KUNTIMA Joseph on the 22nd day of March 1918 in Nkamba, Bas-Congo, southwest of the Democratic Republic of Congo. His is the third or the youngest son of Father Simon Kimbangu and mother Muilu Kiawanga nzitani Mary. At his childhood he was a wonderful and respectful kid. We all know as kids hug their parents when they return home from work or any kind of activity outside the house! In their case, something strange was happening when they were doing so to their father. The eldest ones Kisolokele Charles and Dialungana kiangani were hugging their father normally. But at all instances when father Diangienda K Joseph tried to hug his father he was feeling as if he was hugging himself or hugging in the wide. He wondered a lot why this was happening to him until one day he ended up questioning his father. His father replied that, when you are hugging me, you are also hugging yourself because you are me. So don’t worry. At the age of three in 1921, he witnessed the arrest of his father Simon Kimbangu in Nkamba including his relegation to Elisabethville (currently called Lubumbashi) and the relegation of his elder brother Charles KISOLOKELE LUKELO to Boma and Muanda, in the Mayombe by the Belgian colonial administration. At the age of 16, father Diangienda Kuntima was also relegated to Boma where he attended his elementary and high school and earned his degree on December the 23, 1943. After gaining his degree, he was at first engaged in the Belgian colonial administration in Tsela, then was transferred successively to Matadi on the 9th of October 1946, another transfer to Boma on the 26th of November 1946, another transfer to Léopoldville (the current Kinshasa), on the 19th of May 1947, another transfer to Luluaburg (the current Kananga), September 16, 1950, where he held the position of Secretary in the Governor PEIGNEUX cabinet, and was finally transferred to Leopoldville, on July 17, 1952.
Father DIANGIENDA held several honorary titles of the Belgian colonial Administration and the Republic of Zaire. Orders:
War efforts.
Services rendered and loyal service.
Dedication and the civic merit Medal.
Commander of the Royal order, Crown of the Belgium Kingdom.
Chevalier, officer, Commander, Grand Officer and Grand Cordon of the National order of Leopard of the Demarcate Republic of Congo formerly called Zaire.
Father DIANGIENDA was married to mother MVETE Elisabeth, on March 22,1943 and had several children. In 1948, he received a letter from his father in prison asking him to accept the responsibility of spiritual leader of the Church. Father Diangienda refused stating the reasons for his refusal in his letter:  ..." Father, why not ask my two brothers who are older than me? “They would better be able to assume this responsibility”. Father Simon Kimbangu reiterates his request, which his son refused immediately. After several exchanges regarding this post, father Diangienda agreed eventually.

Despite his influence and opportunities which he gained in the Belgian colonial government, he decided to quit on May 20, 1959, and devoted himself entirely to the liberating work of evangelization started by his father.
December 24, 1959, the Governor of Léopoldville (the actual capital of Congo) in the name of J.B. BOMANS signed an order No. 2211/846 repealing order No. 427/Sec. A.O of 16 November 1937 on dissolution of the Kimbanguism measures. Therefore, the Kimbanguist faithful could freely and publicly worship their God following the Gospel of Jesus Christ taught and invigorated by the Special Envoy father Simon KIMBANGU. After the death of his mother Muilu Kiawanga the one who led the church in the clandestinely, his Eminence Diangienda Kuntima Joseph became the first spiritual chief and legal representative of the Kimbanguist Church after its recognition by the colonial government. Father Diangienda was the most tireless leader with a Noble love and inflexible generosity, a Great orator; able to gather thousands of followers around him. He was the first to narrate the history of this religion in his book entitled "the history of the Kimbanguism."
In the exercise of his Ministry, he implanted the Kimbanguist Church around the world.
He also handled the intellectual and social human development by creating the kimbanguist public schools, medical training school, the faculty of theology, clinics, health center, the hospital of Kimbanseke and social homes. He also helped the Church to accede to the World Council of Churches (WCC) and the Conference of African churches (AETE).
He provided to the Kimbanguist Church (EJCSK) infrastructures of great importance as the temples of Matete, Matadi, Nkamba, Boko, Kimpanzou, the developments community center of Lutendele, Kinkewa, Bateke Plateau, Kounzoulou, etc.
He has initiated and organized the self-financing system in the Church called "NSINSANI" collection, which means competition which really helps build the kimbanguist church until now. Father DIANGIENDA had never ceased to ask people to follow the precepts of Love, obedience to God’s law and good works", summarized by “BOLINGO, MIBEKO, MISALA"(Love, God’s commandments and Works). He also operated so many miracles just like his father had done in the past. He was able to resuscitate dead people back to life and cured any kind of illness just by a simple prayer and touching under the power of the Holy Spirit. History tells us that, a true servant of God always suffer humiliation. Father Diangienda was humiliated by those who hate the truth. But he did not give up as he fulfilled his mission successfully. He predicted his death and died on July 8, 1992. At Geneva (Switzerland).